Home » About KMI » About Us 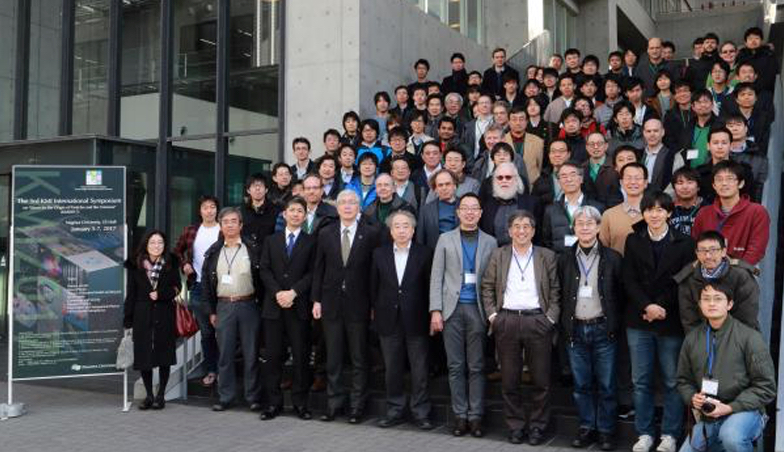 The origin of matter and the universe is a subject that humanity has long pursued. The Kobayashi-Maskawa Institute for the Origin of Particles and the Universe (KMI) of Nagoya University, as an international research hub for particle physics and astrophysics, is challenging this proposition by gathering the wisdom of mankind across the boundaries of specialized fields, languages, and cultures.

At Nagoya University, there have been many outstanding achievements in this field, such as the two-meson theory, the Sakata model, and the Maki–Nakagawa–Sakata theory. Such achievements led to the establishment of the Kobayashi–Maskawa theory, for which Drs. Kobayashi and Maskawa were awarded the Nobel Prize in Physics in 2008. In addition to these theoretical efforts, various experimental research projects, conducted from the early stages, have produced first-class results, including the discovery of the charm quark and the tau neutrino, as well as confirmation of the Kobayashi–Maskawa theory by B-factory experiments. These are key experiments in establishing the Standard Model. With its rich history, Nagoya University has become a fertile ground for nurturing innovation and producing cutting-edge research.

KMI was established in 2010 to build an interdisciplinary research base for particle physics and astrophysics research at Nagoya University. At present, KMI researchers lead the world in theoretical research that goes beyond the Standard Model of particle physics. In addition, KMI researchers play a central role in international experimental collaborations seeking new physics, such as the LHC-ATLAS experiments, Super B Factory, Super-Kamiokande experiments, dark matter searches, and space observations.

KMI brings together and stimulates cooperations among the human resources who research through various methods, such as theoretical research, accelerator experiments, and space observation. KMI aims to be a research organization with dynamism only possible at Nagoya University.