Abstract : Dark matter is elusive and its nature is still unknown. One of the key observations that can provide an important clue to the nature of dark matter is the measurement of its spatial distribution down to kilo-parsec or even smaller scales. I will discuss new approaches to measure the small-scale dark matter distribution, including caustic crossings in arcs behind massive clusters of galaxies as well as amplitude and phase fluctuations of gravitational waves from compact binary mergers. The caustic crossings enable observations of individual stars at cosmological distances, as was nicely demonstrated by our recent discovery of Earendel at redshift of 6.2. Discoveries of many such events, which can well be achieved with the power of the recently launched James Webb Space Telescope, will map the detailed shape of the critical curve, which contains rich information on the nature of dark matter. I will also show how observations of gravitational waves from compact binary mergers can serve as a unique probe of the small-scale dark matter distribution at around parsec scale that is otherwise very difficult to study. 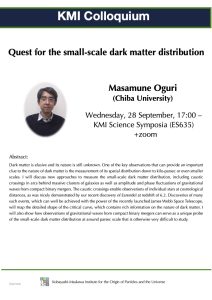