Particle physicists at Nagoya University were very excited watching the memorial event of the new international experimental project, the Belle II experiment using the SuperKEKB electron-positron collider at the KEK laboratory in Japan. On April 26 at 0:38 JST, 2018, the electron and position beams collided each other for the first time, and the particle reaction made by the collision was recorded by the Belle II particle detector. This is one of the greatest milestones of the project. 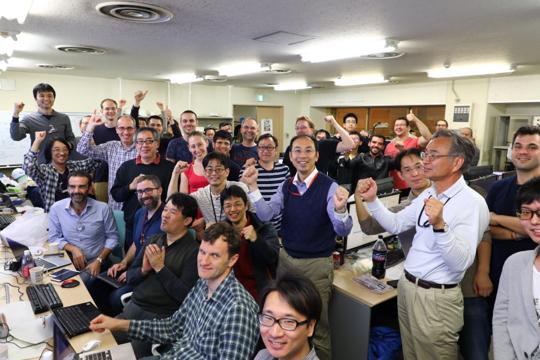 The excitement at the Belle II control room (Credit: KEK)

The SuperKEKB/Belle II project is the successor of the previous KEKB/Belle project, which contributed to the establishment of the Standard Model by measuring the particle-antiparticle asymmetry (known as “CP violation”) in B meson decays as predicted by the theory proposed by Prof. Makoto Kobayashi and Prof. Toshihide Maskawa, Nobel laureates in Physics in 2008.

Still, the Standard Model cannot explain the central mysteries of the Universe including why matter dominates, why anti-matter cannot be found, and what dark matter is, etc… Hence, physicists believe that New Physics beyond that Standard Model is required.
The SuperKEKB/Belle II project allows us to perform high sensitivity search for New Physics in variety of rare processes of “heavy flavor particles”, including the b-quark, the c-quark and the tau-lepton.

“This is just the first one of many many billion collisions that we have to record. Still, it is a great step forward to the discovery of New Physics, that we are desperately looking for! Coming years will be very much exciting time for us!”, said Prof. Toru Iijima, the director of the Division of Experimental Studies at KMI, and also the leader of the World Research Unit for Heavy Flavor Particle Physics. Prof. Alessandro Gaz of the same group continues, “the first collisions are always an emotional moment in the life of an experiment; they represent both the completion of many years of preparation and a start of a long journey, which we hope will bring us important discoveries. As we observe the particles that are being produced in the heart of Belle II, we share the enthusiasm of several hundreds of researchers from many different countries who contributed to this success. Now the real fun begins; it is time to start digging in those data and see what surprises Nature has in store for us“.

The team at Nagoya University led by Prof. Iijima is one of the major research groups in the Belle II collaboration, which plays leading roles in various aspects in the project: construction and operation of a particle detector, called “TOP counter”, newly developed by the group, development of data handling methods using the high performance computers at KMI, and data analysis to find new phenomena.

The commissioning of the SuperKEKB accelerator started on March 21st to start the collision experiment. The first collision event was broadcasted via niconico video service from April 20th. 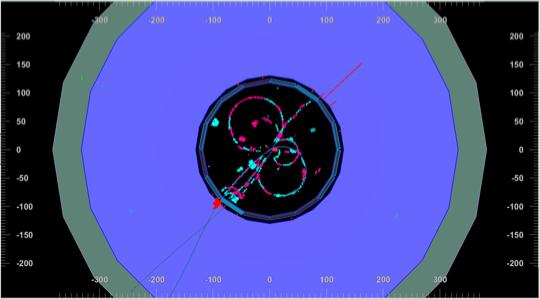 The event display of the 1st collision